A Dividend Milestone Has Been Reached!

As I write this post, Covid-19 has begun to significantly interfere with the way of life of virtually every society across the globe.

Here in the US, most schools are closing down for at least the next couple weeks, many businesses are encouraging or coercing their employees into working remotely from the safety of their home, and sporting events across the country are being postponed.

One of the more disappointing developments aside from the death and disease itself, was the fact that the rest of the NBA season may be in jeopardy if the virus isn't contained in the weeks ahead.

I am still hopeful the NBA season will resume around my birthday on April 15, but so many questions come to mind.

If the season resumes around that time, will all but the last few games not be played and the playoffs will end just a bit later than mid-June?

Will the NBA skip straight into the playoffs and finish at the same time as usual?

One of the few bright spots of the Covid-19 outbreak was that the 3 major US indices entered a bear market this past week.

This created many buying opportunities over the past few weeks that I was quick to take advantage of, which also allowed me to reach a noteworthy and long anticipated dividend income milestone. 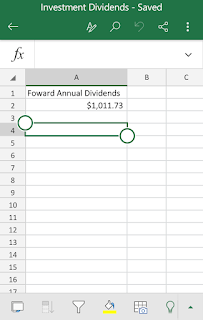 As a result of the capital that I have deployed thus far in March and dividend increases during the month, I surpassed $1,000 in annual forward dividends!

I just wanted to take a few moments to reiterate what convinced me to become a dividend investor.

Time And Commitment to the DGI Strategy Pays Off

While it's true that the DGI strategy isn't going to make anyone a millionaire as fast as an absurdly successful tech start up like Facebook, the DGI strategy is much more doable for us average Joes and Janes that are looking for a consistent and replicable way to build significant wealth and cash flow.

Take for instance that when I received my first dividend in October 2019, my portfolio generated $6.47 of dividends during the month.

What's most impressive about the tremendous growth in dividend income in such a short period of time is that until last August, I was typically deploying less than $1,000 a month in capital as I was paying my way through undergrad.

If this much can be achieved while paying one's way through college the first two years of the investing journey, imagine what can be done in 5 years or 10 years!

DGI Is Relatively Easy to Stick With

Unlike a growth investing strategy that relies on capital gains and the fickleness of the equity markets, DGI produces consistent cash flow and doesn't require an investor to sell off their portfolio at inopportune times during a bear market such as the ones we find ourselves in, in order to fund their lifestyle during retirement.

Despite the panic in the financial markets, dividends have allowed me to think rationally and from the standpoint of an owner in dozens of high quality businesses, which is why I have added quite a bit to my portfolio in the past two weeks.

As is the case with almost every DG portfolio, my portfolio was built gradually, which is a great testament to the effectiveness of a disciplined and committed DGI strategy.

The continued cash flow from my 72 stock holdings and 1 mutual fund has allowed me to endure numerous corrections and my first bear market thus far as an investor.

The dividend portfolio is continuing to make significant progress and is $988.27 away from the next goal, which is $2,000 in annual forward dividends.

I expect to reach the next milestone sometime next spring.

Have you reached any dividend milestones as of late?

Have you been able to take advantage of the current bear market?

As always, I appreciate your readership and welcome any comments that you are free to leave in the comment section below.