As I'm writing this blog post, the Bucks are recently off of their 93-85 victory over the Charlotte Hornets and have improved their record to an impressive 52-8 through the first three quarters of the NBA regular season.

Milwaukee will be tasked at defeating a talented and well coached Miami Heat squad on the road tonight, which will be yet another good test for the team.

Aside from the regularly scheduled Bucks programming that have taken over my blog posts as of late, the primary purpose of this post is to detail my dividend income for the month of February 2020.

Without further ado, I present my dividend income as illustrated in the screenshots below: 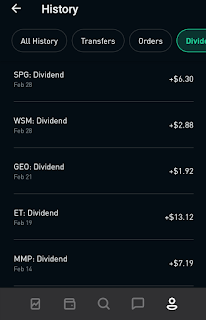 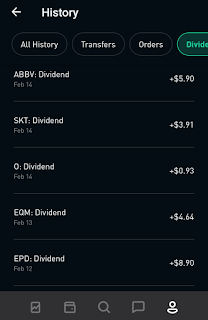 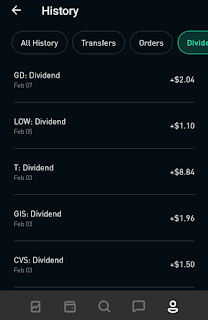 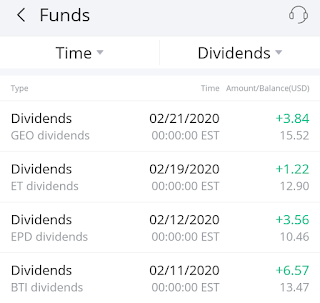 The $22.93 increase in dividends collected from November 2019 to February 2020 was as a result of the following activity:

I received my first dividend payment from Simon Property Group (SPG) since I initiated a position in the company in January 2020, which boosted my dividend income for the month by $6.30.

I also purchased an additional share of The GEO Group (GEO) in my Robinhood account, which added $0.48 to dividend income.

What's more, I received an additional $5.19 in distributions from Energy Transfer (ET) as a result of purchases made over the past couple of months.

In addition, I received an extra $4.13 in distributions from Magellan Midstream Partners (MMP) due to a combination of the distribution increase received in January 2020 and my purchase of additional units in November 2019.

As a result of AbbVie's (ABBV) dividend increase, my dividends were boosted by $0.55 during the month of February.

Enterprise Products Partners' (EPD) distribution increase in January, along with my recent purchases of units increased my dividends from this stake by $4.05 in the month of February.

Another stock purchase in January 2020 that padded my dividend income during the month was that of General Dynamics (GD), which was an extra $2.04.

February marked the strongest middle month of the quarter that I have ever had and it is entirely possible that May could bring my first $100 month for the middle month of a quarter!

I'm very much looking forward to the months that lie ahead for the portfolio and 2020 in general as it will be my first year that I am set to easily surpass at least $10,000 in fresh capital deployed into investments.

Did you have any new dividend payers in February as I did in SPG and GD? How was your month in terms of dividend income received?

As always, I appreciate your readership and welcome any comments that you are free to leave in the comment section below!