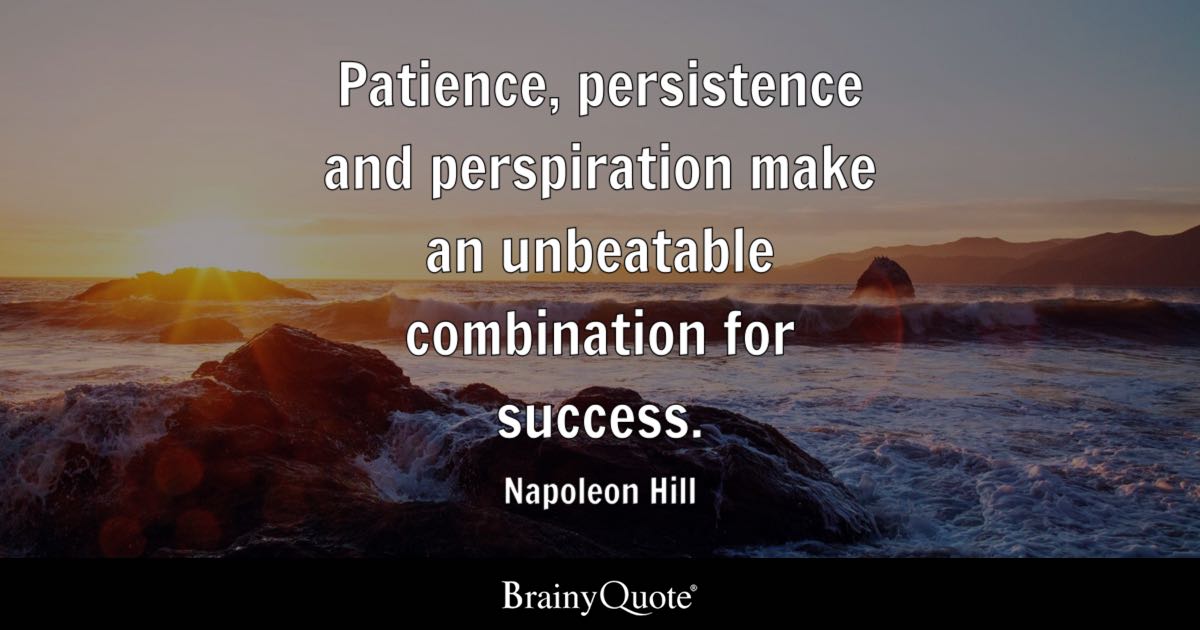 Often attributed to a quote by American self-help author Napoleon Hill, I believe that perspiration, persistence, and patience are three traits an individual can develop over time that when properly harnessed can lead to unbelievable success. I'll discuss each of these traits in more detail and describe why each is as important as the other.

The Willingness to Perspire Is the First Step to Greatness

The first step to greatness is the willingness to put in the work. As the saying goes, "every master was once a beginner. Every pro was once an amateur." Whatever you decide is worthy of mastering, you're going to have to put in a tremendous amount of work. Michael Jordan put in tens of thousands of hours into his game, which led to his eventual succession into the GOAT discussion.

How often have we been told by infomercials and people trying to sell us stuff that you can lose 10 pounds in a month without watching your diet or exercising, or that you can earn more money working from home than you can at your day job and put in 10% of the effort? Not surprisingly, the foundation of America has been built upon convenience. If I told you that you could achieve all you ever want in life with very little work, you'd probably be skeptical but you'd still watch my infomercial and maybe even buy my product.

The inconvenient universal truth in life is that in order to be the best, you need to work unlike anyone else is willing to work. If it was easy to be great, don't you think everyone would do it? There is only one Michael Jordan because he was willing to dedicate tens of thousands of hours of his life to his craft. The same goes with Warren Buffett and any other wildly successful person you name.

The Ability to Persist Separates the Best from the Rest

While hard work is absolutely necessary to building success, it is only the starting point. Although the quote often attributed to Churchill was quite literally referring to the hell of war and what the British endured during World War II, we're all probably aware that life isn't always going to be a picnic at all times. Even if you're doing what you love, there will undoubtedly be days that you don't want to do it.

A key difference between someone that is successful and someone that could have been successful is in their ability to persist through the obstacles that life throws at them. We've probably all experienced in our own lives or witnessed someone embark upon a goal only to give up when meeting a slight bit of resistance.

Think of the New Year's resolutions that that many of us set and then give up on within a few weeks. Maybe we had a goal to lose 10 pounds for the year and a month into the year, we actually gained 5 pounds. We're going to encounter trying times where we feel like giving up, but we need to realize that with every setback comes opportunity (link to post about why I embrace failure).

The Capability to Remain Patient Allows One to Stay the Course

Among my favorite quotes of the sage Warren Buffett, is undoubtedly the one illustrated above. Applying his quote from an investing standpoint, I often think of the example that when I was starting out as a dividend growth investor. I invested a bit over $2,000 and my annual dividends at that time were around $80.

While I'm still in the early innings of my investing career, the incredible thing is that I've managed to amass an investment portfolio worth about $14,000 which generates over $600 a year in dividends for me. Between dividend reinvestment and dividend increases, my annual dividend income is practically increasing by that $80 mark I started at. This will only accelerate as time progresses and compounding does the heavy lifting for me.

Unless you're basically a millionaire already, you won't be a millionaire tomorrow, next week, next month, or next year. Outside of winning the lottery or inheriting a fortune from a long lost uncle, it doesn't matter how hard you work in the next few months or the next year.

If you have the expectation of achieving success in a very short time span, you'll eventually give up when you inevitably don't achieve the results you desire. The only way to achieve your financial goals or any goal in life for that matter, is to remain patient and stay the course. Nobody ever achieved success by giving up.
Conclusion:

The first step in achieving any success is the willingness to work harder than everyone else. There are no shortcuts to achieving incredible goals. Expanding upon this, you have to be willing to endure your fair share of challenges and obstacles along the way. Life is not a linear progression. There are peaks and valleys throughout life. And, finally, nothing in life worth achieving is going to be able to be achieved in the time it took for me to write this post or for you to read it. Great things take time, and no amount of effort is going to change that. If we're able to develop and implement these three traits into our lives over time, there is very little that isn't possible for us to achieve. I believe we're only limited by our willingness to put in the work, our ability to endure adversity, and to remain patient.
Discussion:

What do you think of the three keys to success? Are there any others that come to your mind? As always, thanks for taking time out of your schedule to read this post. I look forward to any comments you may have.