3 More Lessons I Have Learned After 2+ Years Of Investing 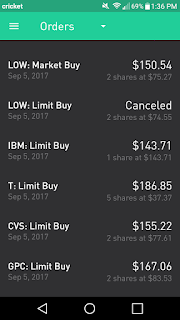 It's incredible to think that I've been investing for over 2 years at this point as illustrated by the screenshot of Robinhood above.

As a testament to the notion that time really passes us by without us even noticing, I was somewhat planning on writing and publishing a followup post last fall to my post titled "Lessons After One Year of Investing."

I never created a draft for this blog post, so it was only now after several months have passed, that I am finally getting to writing this post. But better late than never, right?! Without further ado, I'll present 3 more lessons that I've learned over the past couple years of being invested in the stock market and dividend growth investing.

Lesson #1: Don't Underestimate The Power Of Small Investments Here And There

As someone that has been interested in the theoretical aspect of investing for the past decade, one big influence on my overall views of personal finance and even my life in general to an extent has been Joshua Kennon through the works on his personal blog and About.com (and The Balance after About.com).

Although Joshua took down many of his posts prior to launching his asset management firm, Kennon-Green & Co., there are still a tremendous amount of posts between his personal blog and The Balance.

One of the first lessons that I learned from Joshua after initially stumbling on his early work through About.com and later his personal blog, was Zechariah 4:10, which to paraphrase was "do not despite the day of small beginnings."

Even the vastest of fortunes were built from the ground up. When given enough time, small and steady investments of capital grow into significant amounts of capital that allow an individual to become financially independent.

It was the adoption of this mindset from an early age that would eventually lead me to begin investing at age 20 while I was still in college.

While I was eventually able to graduate college debt free (thanks to a bit of insight on my part and admittedly, a lot of luck as well), I wasn't too much different from most college students in that I was on a pretty tight budget throughout most of undergrad. This was especially the case because I was paying all of my tuition entirely out of pocket, which left me with limited funds to begin investing.

As a byproduct of the low commission era we live in and fintech companies like Robinhood, which revolutionized the industry by democratizing investing for even relatively broke college students like myself, I was able to begin investing in September 2017 with my initial deposit of $2,240.00 shortly before I started my final two years of undergrad.

It was from that point, I rarely invested more than a few hundred dollars a month until I finished undergrad last summer.

While the portfolio undoubtedly has a ways to go and I'll continue to build it in the years ahead, my point is that I've definitely seen the benefits of compounding in real time over the past couple years of investing, which leads me into the next point.

Lesson #2: Dividends Sure Are Sweet

The great thing about starting your investing journey, especially as a dividend investor, is that you are able to gradually transition from an employee to an owner in real-life businesses that conduct operations throughout the globe and generate tons of cash flow, which is passed onto you as the owner in said businesses, in the form of dividends.

In my particular case, I have collected $1,104.93 in dividends since I received my first dividend from Genuine Parts Company (GPC) in October 2017.

Obviously, $1,104.93 isn't a life changing amount of money. The flip side of the coin is had I never made the decision to invest my spare capital, I would have collected zip, zero, nada in dividends.

This is cold, hard cash that can be used however I'd like it to be. While I plan on actively reinvesting all of these dividends to build the portfolio over the next 15-20 years, the option is there for me to eventually begin living off of dividends.

And building off of the first lesson in this post, the really incredible thing is that in the 28 months that it took me to collect my first $1,104.93 in dividends, I anticipate that from now until the end of 2020, I will be able to match that amount.

Let that sink in...in the barely 10 months we have remaining in 2020, I will have collected as much and maybe even a bit more in dividends than I have in the first 28 months!

If that doesn't sell the importance of investing for cash flow and why we must start investing as early as possible, I'm not sure what will!

Lesson #3: There Are Sure To Be Short-Term Bumps In The Road

What I mean by this is that when I purchased most of the companies in my portfolio, I did so with the intent of benefiting from immediate dividend growth.

It's important to note that even though companies do freeze their dividends from time to time, that isn't necessarily a cause for concern and reason alone to sell.

In the case of CVS, the company is doing quite well since the closing of its acquisition of Aetna. Not only is CVS deleveraging, but it's also producing strong operating results.

It's these two simple reasons that lead me to believe that the dividend is almost sure to resume high-single digit growth in 2-3 years.

While things sometimes won't go as you planned they would in the short-term, you need to be patient and realize that as long as you believe the investment thesis is intact in your investments, you would be wise to continue to hold them for the long-term.

After all, the other companies in your dividend portfolio will likely be making up for the companies that have elected to freeze their dividend for a while.

Investing can be intimidating because we're often misinformed that in order to begin investing, we need to start with thousands of dollars, but this simply isn't the case nowadays. Investing has been revolutionized by the likes of Robinhood and a race to the bottom in fees.

Along those same lines, although dividends begin small and seemingly insignificant, those dividends are the start to an incredible journey to achieve financial independence.

Like all things in life, investing isn't always easy and investments don't always go to plan. However, a valuable lesson I have learned in the past couple years is to hold investments for the long run so long as the investment thesis remains intact.

Which of the lessons did you find most helpful to learn or be reminded of in this post?

Are there any other lessons that you've learned since you began investing that I failed to mention in this post and my initial post in this ongoing series?

As always, your readership is very much appreciated and I look forward to replying to any comments that you are free to leave in the comment section below.