As I write this, we're in the final week of September and it will be the first day of October when this post is published. Overall, I'm making incredible progress on my goals for this year, and I'll probably be releasing an update on my progress with all my goals for the year.

At the very least, I'm on track to accomplish all of my goals, and I'm on track to crush some of them (which really warrants revisions to a few of the goals). The first day of October also marks the last quarter that we have to work toward achieving our goals for this year, so I'd encourage others to examine their goals. You may be as surprised as I am at the progress you've made thus far.

With that aside, we'll now delve into our dividend income for the month of September. 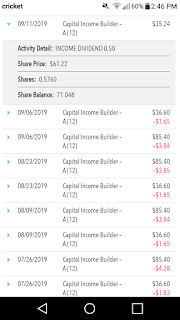 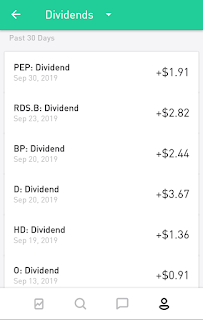 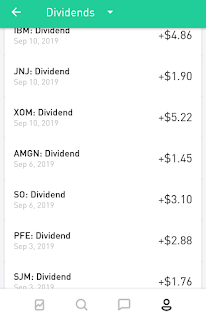 The quarterly growth in the dividends collected in my Robinhood account stemmed from receiving a dividend increase from Realty Income (O), which boosted dividend income by $0.01.

The remaining $0.06 of increased income originated from JM Smucker's (SJM) raised announced a couple months back.

The $6.82 in additional dividends from my retirement account originated solely from reinvestment of the previous dividend in June and additional contributions.

I received an additional $0.05 from Pepsico (PEP) due to its dividend increase a while back.

I netted $0.02 less from British Petroleum (BP) due to the ADR fee associated with dividends from BP.

I was paid an extra $1.16 from Dominion Energy due to the purchase of an additional share of the company following my decision to sell off my remaining shares in Omega Healthcare Investors (OHI) at a nice profit.

Realty Income paid me an additional $0.03 in dividends as a result of a number of raises since last September.

Home Depot (HD) sent an additional $0.33 my way due to its massive raised announced a number of months ago.

Johnson & Johnson (JNJ) also paid me an additional $0.10 in dividends due to its raise that was announced in April.

International Business Machines (IBM) sent me an extra $0.15 due to its dividend increase announced in April.

Southern Company (SO) paid an additional $0.10 to me from its dividend increase announced in...you guessed it - April.

Amgen (AMGN) sent an additional $0.15 to me because of its dividend increase announced last December.

JM Smucker paid an extra $0.06 as a result of its dividend increase.

Last but not least, Pfizer (PFE) paid me an additional $0.16 from its dividend increase announced last December.

Fortunately, I'm not quite done yet with record total dividend income as December still remains, and that will likely include a special dividend of some sort from my mutual fund holding, which may possibly push dividend income over $100 in December to end the year. Talk about ending the year with a bang! Triple digits would be a great way to end 2019 and usher in 2020!

Was your September a record month for you as well? Did you benefit from as many dividend increases I have have since June, and especially since last September?

As always, thanks for reading! I look forward to replying to any comments you leave below.