As we've ushered in the New Year, I've spent time the past couple weeks on formulating my specific goals for 2019. 2018 was a rather notable year for me as it was my first full year of investing and the first year that I was able to take advantage of contributing to a retirement account. It was also my first full year of my first "real job" and it also marked the first full year that I began exercising 30 minutes a day, 7 days a week. I also became a Seeking Alpha contributor in the last month of the year! Finally, it set the foundation for what I believe to be ambitious goals both financially and personally in 2019 and beyond. 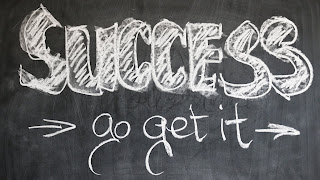 Starting off with financial goals, I have numerous goals that I am striving to achieve in 2019 including:

As I mentioned in my previous post, I collected $360.92 in dividends in 2018. This was just above my goal of $350, so I believe that I set a fairly realistic goal in that it wasn't like I blew my goal out of the water, nor did I completely fail at achieving it. I'm aiming for $550+ because although I'll be graduating in August, I won't really have access to very much capital to invest in dividend stocks until 2020 as I'll be saving the last few months of the year to purchase a reliable vehicle of my own. As such, I believe that collecting over $550 in dividends for 2019 would be a rather significant growth rate compared to 2018, given its a 52% YOY growth all while paying for education expenses, saving for a car, and paying my fairly minimal living expenses.

Secondly, ending the year in over $600 in forward annual dividends would almost guarantee that I would be able to collect at least $550 in dividends in 2019. Given that I starting 2019 at $470 in dividends, if I steadily continued to invest throughout 2019, ending the year with $600 in forward annual dividends would mean that I would collect roughly the mid point of those two numbers in dividends. This would mean that I'd collect roughly $535 in dividends, which isn't too far off my $550 goal, and would give me a high chance of achieving that goal with a bit more effort.

Although the third goal of amassing $15,000 in investments is dependent upon one variable out of my control (i.e. market gyrations), it does remind me of the second variables which are fresh capital contributions/dividends, as those also increase an investment balance. It's this reminder that will continue to inspire me to work towards the first two goals. With investments worth just over $10,000 at the time of writing this, and with nearly $3,000 of projected retirement contributions, it would take nearly $2,000 in capital appreciation to achieve this goal. Although I believe this is a goal that a bit lofty, it is still within the realm of being achievable, and I believe it will push me to my limit. It's pushing yourself to your limit that allows you to reach your full potential as a human. Nobody ever accomplished anything worthy of discussion without stepping out of their comfort zone and laying it on the line.

Lastly, on the financial goals front, I intend to purchase a used compact car in cash. Given that my father is in the automotive industry, he has kindly agreed to help me find a used car that we can fix. My first car and my current car were both wrecked cars that he bought and fixed. We got 13 years out of my 2003 Cavalier before my father recently considered selling it since we have no use for it anymore. Anyways, I should be able to find a smashed car such as a 2014 or 2015 Chevrolet Cruze for somewhere around $3,000, stick another $3,000-4,000 into it and have a 4-5 year old car with around 50,000 miles on it. This is one of the larger goals of the year as I've never technically owned a car before. As I've mentioned before, I've been quite fortunate to have my parents lend me a car to get me through the last couple years of high school and all of undergrad. It's incredibly expensive to buy/maintain a car, so having parents willing to lend you a car for over half a decade is amazing. Having a father to service a lot of the issues you run into with vehicles also saves you thousands on the maintenance category of your transportation budget.


Moreover, I have several personal development goals for my career and hobbies including the following:

1. Continue to publish at least one blog post each week
2. Publish at least 50 articles on Seeking Alpha
3. Secure an entry level accounting/finance position

On the personal development end of my goals, I'm really just seeking to maintain what I've been doing in regards to writing/blogging about what I enjoy covering. The current blogging schedule that I'm on strikes a perfect balance in my life at the moment when considering my other responsibilities in life, including work and college. And as far as Seeking Alpha goes, I'd like to publish an article every week about the most compelling investment opportunities at a particular time, in my opinion. Any type of monetary benefits that are included in this gig really are just icing on the cake. I enjoyed writing my 2,000 word analysis of Altria more than my 3,000+ word Rogerian argument for my Argumentation and Research class on why the minimum legal drinking age of 21 should be upheld (and I even chose the topic myself). In my limited time as a Seeking Alpha contributor, I've found that the community there is very insightful and helpful in testing an investment thesis. If you miss any significant risks posed to the business you're analyzing, somebody will bring it to your attention. It's this type of interaction and constructive feedback that will shape me into a better investor over time, all while enjoying the process.

Lastly, we get to perhaps the most important goal of the year. As I've alluded to a few times, I'll be graduating with my BA in Accounting in August, so I'll be looking to either move into more of a business capacity at the law firm I currently work for or I'll be entertaining the option of entry level positions as a credit analyst, accountant, etc. Living in a small, stagnant city, with an aging population, I know I won't be making the $50,000+ starting salary that an average business grad typically receives these days. I do believe that I should be able to secure a raise of at least 25% on the roughly $26,000/year I'm currently earning. I've been scoping out the local job market recently and have seen a few entry level finance/accounting jobs that are paying starting salaries of $35,000-40,000.

Securing a starting salary of this magnitude upon graduation while living at home for just over half of what the local market charges in rent would be paramount to being able to achieve my desired 60%+ savings rate in 2020 and beyond, which would further enable me to meet my longer term goals of becoming financially independent in my 30s.

Overall, I believe 3 of my 4 financial goals will prove to be achievable yet not easy to accomplish. Of all my financial goals, I actually believe hitting $15,000 in investments is going to be the goal that could prove to be a reach. If the market continues its lull that it's in, there is a very good chance I won't reach that goal, but I can say that I'll do my best to hit it! As far as the personal development goals go, I don't envision any major issues in achieving those goals, provided I just continue to do what I have been doing.

What are your goals for 2019? Are any of your goals what you would consider a stretch?