With each passing month, I become more and more convinced that life passes us by in a hurry. It seems as though it was just yesterday I was writing my expected dividend increases for May post, even though it was a month ago. 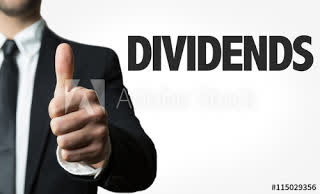 Given that Lowe's will be hosting its Annual Meeting of Shareholders this Friday, I expect that we will be receiving a 5.5% increase in LOW's quarterly dividend from $0.55/share to $0.58/share

Across my 4 shares of LOW, this would result in a $0.48 boost in my annual forward dividends.

Given that Realty Income has been arguably the most consistent performer in my portfolio in terms of dividend increases, I wouldn't be surprised to see O announce a 0.2% increase in the monthly dividend from $0.2330/share to $0.2335/share.

Across my 7 shares of O, this would increase my annual forward dividends by $0.042.

WP Carey is another consistent dividend payer within my portfolio that is likely to increase its quarterly dividend by 0.2% from $1.040/share to $1.042/share.

Across the 5 shares of WPC, this announcement would boost my annual forward dividends by $0.040.

While I am awaiting an announcement from Lowe's this Friday, this month has only resulted in a dividend suspension from Tanger Factory Outlet Centers (SKT) among my 51 whole share holdings.

Although I do believe there will be another cut or two within my portfolio in the months ahead, I am certainly encouraged that my dividend income has only been reduced by 4% during an unprecedented response to COVID-19.

In my humble opinion, the overall performance of my dividend portfolio and its ability to continue to pay dividends has only reinforced my confidence in the DGI strategy.

Have you benefited from any dividend increases this month?

Have you experienced any dividend cuts or suspensions?

As always, I appreciate your readership and welcome comments in the comment section below.
Posted by Kody at 4:02 PM No comments:

The Impact Of Dividend Announcements On My Portfolio (So Far)

As the response to contain COVID-19 as best as possible continues with trying to balance the economic and mental health aspect that the virus is having on just about every American, I thought it would be helpful to examine the impact that a generational economic downturn has had on my portfolio, especially considering this will be the first recession that my 51 whole share stock portfolio has endured since I began investing in September 2017.

Delving right into the impact on dividend announcements, and particularly on dividend cuts/suspensions, my portfolio has held relatively strong to date, with the following 2 dividend/distribution cuts and a dividend suspension.

In a sector that is as dependent on the global economy as that of the energy sector, it was only somewhat surprising that the supermajor Shell opted to cut its dividend for the first time since World War II.

After all, the Energy Information Administration or EIA estimates that global petroleum and liquid fuels consumption averaged 94.1 million barrels per day in the first quarter of 2020, which was a decline of 5.8 million bpd from the same period in 2019.

As I discussed in my recent Seeking Alpha article on Energy Transfer, oil faces two key challenges in the months ahead, which is the notable decline in energy demand coupled with the excess supply of oil.

EIA predicts that these two factors will weigh heavily on the price of WTI crude this year, with WTI averaging $30. Fortunately, a recovery is expected next year, with prices expected to average $43 as energy demand recovers and excess supply of oil is depleted.

Keeping all of this in mind and the fact that Shell seeks to minimize the burden of the pandemic on its balance sheet, it makes sense that Shell made the decision to slash its quarterly dividend by 66.0%, from $0.94/share ($0.47/share, but each American Depository Shares counts as 2 shares) to $0.32/share.

As a result of Shell's decision to cut its dividend, my annual forward dividend income declined by $22.32 across my 9 shares.

Unlike Shell and the dividend announcement that was slightly surprising, it wasn't at all surprising that EQM Midstream Partners announced a 66.6% cut in its quarterly distribution, from $1.16/unit to $0.3875/unit.

It was just this past February that EQM announced that it would be acquired by Equitrans Midstream (ETRN) and that a significant distribution cut would be in the works.

Across my 4 units of EQM, my annual forward distributions dropped by $12.36.

The dividend suspension in my portfolio came last week, when Tanger Factor Outlet Centers announced that it would be suspending its quarterly dividend of $0.3575/share for the foreseeable future in order to preserve liquidity during the COVID-19 pandemic.

SKT also added that the company sees sufficient liquidity for 2 years, which is an encouraging sign as the tenants of SKT and their customers gradually shift back to the experience-centric mindset, which brought most of them to malls in the first place.

My annual forward dividends were reduced by $15.73 across my 11 shares of SKT as a result of the company's dividend suspension.

Given the magnitude of the COVID-19 pandemic and the unprecedented shutdown of significant portions of the global economy, I am relatively impressed with how my dividend portfolio has held up to date, though I wouldn't be surprised to see another cut or two in the weeks/months ahead.

How has your portfolio held up in the unprecedented global economic response to COVID-19?

Has it been better than expected given the circumstances or worse than you expected?

Has this event challenged or reinforced your belief that a dividend growth investment strategy is viable regardless of economic conditions?

As always, I welcome and appreciate any thoughts that you leave in the comment section below. Thanks for reading!

As I'm writing this post, it's difficult to comprehend that April is already behind us and the year is already more than a third in the books with less than 8 months remaining. 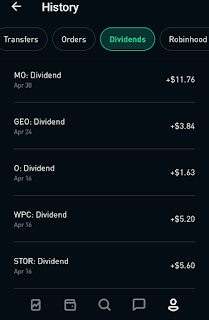 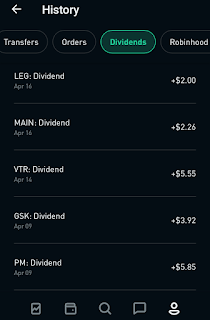 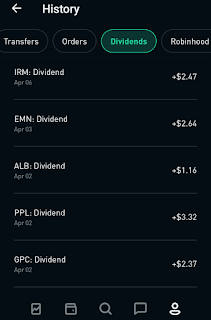 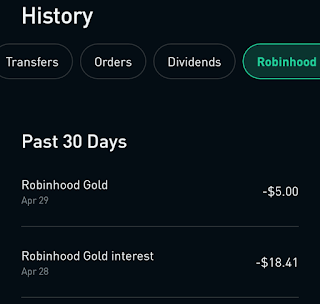 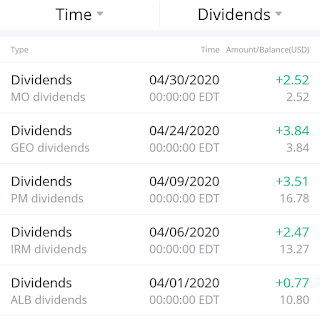 Overall, I collected $49.52 in dividends net of the $23.41 in Robinhood Gold fees and interest on margin during the month of April.

When weighed against the $23.41 in Robinhood Gold membership fees/margin interest, the $3.71 in additional dividend income collected during April compared to January of this year was as a result of the following activity within the portfolio:

Due to the timing of The GEO Group's (GEO) dividend payment and the purchase of an additional 4 shares in March, I also received an additional $7.68 in dividends from the prison REIT.

Another $0.72 in dividends received were from my 3 share addition to my stake in Realty Income (O) also in March and the most recent dividend increase.

An additional $2.09 in dividends were received from WP Carey (WPC) as a result of my purchase of an additional 2 shares in March and the recent dividend increase.

Another March purchase that provided me with a first time dividend during the month of April was that of my 16 share purchase of STORE Capital (STOR), which boosted dividend income by $5.60.

Yet another March purchase was Main Street Capital (MAIN), which provided me with my first dividend from the company of $2.26 for the month of April.

I received an additional $2.38 in dividend income from Ventas (VTR) as a result of my purchase of 3 shares of the stock in March.

GlaxoSmithKline (GSK) paid out an additional $0.47 in dividends compared to January as a result of its historically higher April payout.

I purchased an additional share of Philip Morris International (PM) in March, which boosted my dividend income by $1.17 during the month of April.

I purchased 4 shares of Iron Mountain (IRM) in my Webull account in January, which increased my dividends by $2.47 during the month of April.

Eastman Chemical Company (EMN) paid an additional $0.66 in dividends during the month of April as a result of my purchase of a share in March.

Albemarle's (ALB) recent dividend increase added $0.09 to my dividend income for the month of April.

The final dividend increase came via Genuine Parts Company (GPC), which padded my dividend income by $0.08 for April.

The dividend income across my Robinhood and M1 Finance portfolios was $1.93 ($1.91 in Robinhood and $0.02 in M1 Finance) lower as a result of the timing of PepsiCo's (PEP) dividend.

April was a record month for dividend income for an opening month of a quarter and I expect that my July income report will eclipse the $55 mark in net dividend income as I continue to use my dividends and fresh capital to pay down my margin to the first $1,000 in interest free margin within my Robinhood account.

How was your April in terms of dividend income?

Did you receive any dividends from new stocks in your portfolio for the first time as I did with STOR and MAIN?

As always, I appreciate your readership and look forward to reading any comments that you are encouraged to leave in the comment section below.

As I indicated in my previous post of this series, the bulk of my capital allocation into early summer will be focused on paying down my Robinhood margin from the $4,960 that it was entering May to $1,000 of interest free margin.

As a result of this commitment to deleverage, my investing activity was relatively limited for the month of April as I'll discuss below. 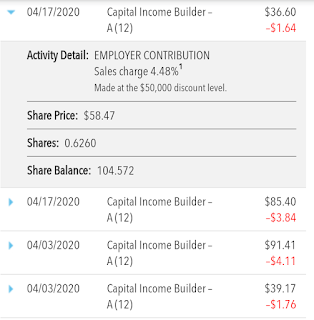 Starting with my retirement account, my employer and I contributed $252.58 to my Capital Income Builder (CAIBX) holding.

Given that these transactions increased my total share count of CAIBX from 100.088 shares entering the month of April to 104.572 shares heading into May, I added 4.484 shares of CAIBX during the month.

Assuming annualized dividends per share of $2.14 ($0.50/share quarterly dividends plus an annual special dividend of $0.14), this boosted my annual forward dividend income by $9.60, which is a net yield of 3.98%.

The only actual stock purchase came in my Webull brokerage account, which was when I purchased a share of STORE Capital (STOR) at a cost of $16.78.

When considering the $1.40 in annual forward dividends added by the purchase, this equates to an 8.34% yield on the capital deployed.

Aside from the purchasing activity this month, the notable development was that I paid down my Robinhood margin balance from $5,780 to just below $5,000 as a result of an $800 deposit.

Overall, I invested $258.01 in dividend stock/mutual fund purchases during the month of April, which collectively added $11.00 in annual forward dividend income.

Unfortunately, I encountered the distribution cut from EQM Midstream Partners (EQM), which was included in my previous post in my expected dividend increases series.

On top of that, I will be including the recently announced 66% dividend cut from Royal Dutch Shell (RDS.B) in my next dividend increases/announcement post as they cut their dividend for the first time since World War II on the last day of April after I updated my previous post a couple of times preceding the cut.

As a result of these dividend cuts sustained during the month of April and all other activity, my dividends edged slightly higher to just under $1,100 heading into May.

Given that the month of May will include 3 paychecks rather than 2, I expect that I'll be able to pay off nearly $2,000 in margin during the month, which will get me significantly closer to reaching my target of $1,000 of margin.

From that point, I will be allocating 5-10% of my portfolio to cash in order to take advantage of future corrections and bear markets to prevent myself from succumbing to the risk of taking out too much margin and being a forced seller.

How was your month in terms of purchasing volume?

As always, I appreciate your readership and look forward to any comments that you are welcome to leave in the comment section below.