As I'm writing this blog post, we're just a couple months away from the year coming to a close. I've indicated it before in past blog posts and I will again: the speed with which this year is passing us by has not and will not cease to amaze me. 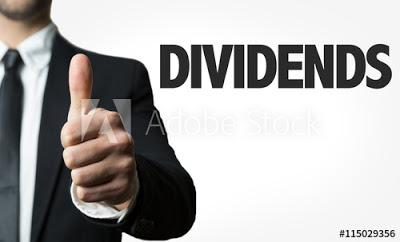 Pending Dividend Increases/Expected Dividend Increases for October/Surprise Distribution Cut
Pending Increase #1: Visa (V)
I will reiterate my thoughts pertaining to Visa's (V) upcoming dividend announcement once again just as I did in my previous post of the series, which is that I'm expecting a 10.0% increase in V's quarterly dividend from $0.30/share to $0.33/share when V reports its earnings on Wednesday.
Even though this year has been difficult as a result of COVID-19 due to business closures and travel restrictions, the fact that V has plenty of room with regard to its payout ratio leaves me confident that although we won't see nearly as strong of a dividend increase as last year's 20% increase, V will still deliver a robust dividend increase all things considered.
UPDATE:
I was a bit surprised to learn that V announced a 6.7% increase in its quarterly dividend from $0.30/share to $0.32/share, which was slightly below my expectation outlined above, but I don't fault V for taking a conservative approach to their dividend increase for this year while the global economy gets back on track in the months ahead.
Across my 2 shares of V, this announcement increased my annual forward dividends by $0.16.
Missed Expected Dividend Increase #1: AbbVie (ABBV)
Given that AbbVie (ABBV) has reported earnings in November over the past couple years and has also announced its dividend increases in November, I failed to include ABBV's expected dividend increase.
ABBV has delivered fair operating results year to date, especially considering the impact of COVID-19 on both its Botox Cosmetic and Therapeutic businesses.
As a result of ABBV's operating results and the accretive impact of its acquisition of Allergan earlier this year, Yahoo Finance analysts are expecting $10.44 in EPS this year and $12.14 in EPS next year, which leaves plenty of room for a high-single digit dividend increase.
I am expecting ABBV to announce a 9.3% increase to its quarterly dividend from $1.18/share to $1.29/share when the company reports earnings this Friday.
UPDATE:
ABBV managed to exceed my expectations as the company announced that it was hiking its quarterly dividend 10.2% from $1.18/share to $1.30/share.
Across my 6 shares of the stock, my annual forward dividends were boosted by $2.88 as a result of the above dividend announcement.
Distribution Cut: Energy Transfer (ET)
Energy Transfer announced a 50% cut to its quarterly distribution from $0.305/unit to $0.1525/unit.
While this did catch me a bit by surprise in that ET's distribution remained relatively well covered prior to the announcement of its distribution cut, I do understand the rationale for the decision to cut the distribution.
When considering the possibility of contending with penalties for operating without a permit in the case of DAPL and additional disputes pertaining to the Mariner pipeline in Pennsylvania, as well as ET's debt load, I think that despite how painful this cut was for me, it was a necessary one for the continuity of the business going forward.
It also provided a much needed reminder for me to focus more on dividend growth and capital appreciation going forward, which is why I will be emphasizing the purchase of SWANs such as PepsiCo (PEP), Johnson & Johnson (JNJ), and General Dynamics (GD) in the weeks ahead.
This distribution announcement resulted in a $35.38 plunge in my annual forward dividends/distributions across my 58 units of ET.
Expected Dividend Increase for November: Iron Mountain (IRM)
Staying on the theme of reiterating my outlined expectations in the previous post of this series, I am doubling down on my thoughts relating to Iron Mountain's (IRM) upcoming dividend announcement.
Given that IRM is working to reduce its AFFO payout ratio to a more sustainable payout ratio that is in line with its data center REIT peers, I'm not expecting a significant increase in IRM's dividend.
Due to this stated objective of IRM, I am expecting that IRM will announce a 1.1% increase in its quarterly dividend from $0.6185/share to $0.6250/share.
This announcement would increase my annual forward dividends by $0.208 across my 8 shares of IRM.
UPDATE:
I initially thought that IRM's earnings were going to be reported on October 29, but I noticed after I published this blog post that IRM will be reporting earnings on November 5.
Concluding Thoughts:
Aside from the distribution cut from ET in the final few days of this month, I was pleased with the dividend announcements this month as V and ABBV both delivered nice dividend increases, especially in light of how this year has been on the dividend announcement front.
Despite the $3.04 uptick in annual forward dividends from V and ABBV, my annual forward dividends declined $32.34 as a result of the halving of ET's distribution.
Discussion:
Have you benefited from any first time dividend increases as I did from V's recent dividend announcement?
Has your portfolio stabilized in terms of dividend announcements as mine has over the past couple months (aside from ET's recent announcement)?
As always, I appreciate your readership and look forward to any comments that you are free to leave in the comment section below!
Posted by Kody at 6:07 AM