As I'm taking the time to write this post, it's nearly the middle of October!

We just experienced our first overnight freeze here in Central Wisconsin a few nights ago, which means that fall is in full effect and our first snowfall is likely just a few weeks ago.

With that side note out of the way, I will be delving into the intent of this post, which is to discuss my dividend stock purchases during September. 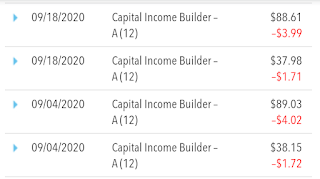 Starting with the activity in my retirement account, I deployed $317.43 in capital between my 7% contribution, my employer's 3% contribution, and the $63.66 in dividends during the month that were reinvested.
Net of the $11.44 in sales charges, I deployed $305.99 in capital to my Capital Income Builder (CAIBX) position, which boosted my share count from 125.273 heading into September to 130.445 going into October.
This increased my annual forward dividends by $11.07, which equates to a net yield of 3.62%.
Moving to my Robinhood account, my margin fell from $1,683.91 at the beginning of September to $1,619.88 at the end of September as a result of the net dividends of $64.03 that I received in my Robinhood account during the month.
This reduction in my margin helped to pad my annual forward dividends by $3.20 when factoring in the 5% interest rate on Robinhood margin over the first $1,000.
Concluding Thoughts:
I deployed $370.02 in capital (including dividend reinvestment) during September and added $14.27 in annual forward dividend income as a result of my capital deployment, which works out to an average weighted yield of 3.86%.
When also including the dividend announcements during the month of September for my portfolio, my annual forward dividend income was up just over $17 and I came into October just over 1% away from my all-time high annual forward dividend income of $1,252.
I am continuing to make significant progress in deleveraging my Robinhood margin and anticipate that I will have all margin repaid by the end of October (aside from the $1,000 of interest free margin). My credit card debt was less than $2,000 heading into October (most of which is interest free until next March), which means that I will be able to resume my $1,500/month capital deployment schedule starting in November.
Discussion:

How was your September in terms of capital deployment?

Were you fortunate enough to not have endured a dividend cut in your portfolio's dividend announcements during September?

I appreciate your readership and look forward to replying to your comments in the comment section below!