The month of August has come to a close and that means that the beginning of the NFL regular season will be upon us in a matter of days. My Green Bay Packers are set to open the season against the Chicago Bears two days after this blog post will be published.

More importantly, the end of August means two additional things. It means that we only need to get through September and half of October before the NBA preseason begins, and the regular season begins two weeks after that. I'm more excited now for the Milwaukee Bucks than I ever have been in the 15+ years that I have been a fan. This very well could be their season to win it all.

Secondly, it's time for us to examine the amount of dividend income our portfolio generated for us in the month of August.

Before we delve into that, I'd just like to announce that I opened a Webull brokerage account last month and have since purchased 7 additional units in Enterprise Products Partners (EPD) and I initiated a new position position in The GEO Group (GEO), which I recently discussed in a Seeking Alpha article on GEO. 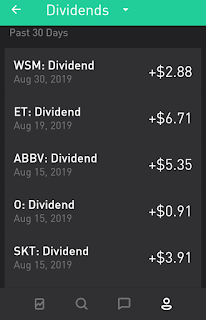 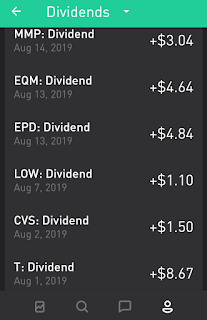 Breaking it down a bit further, $45.51 originated from 12 companies in my Robinhood account, $3.08 from EPD in my Webull account, and the remaining $0.34 from 15 companies in my M1 Finance account.

The $4.89 increase in my dividend income compared to May is due to a variety of factors discussed below:

Since May, I have purchased an additional 3 units of Energy Transfer (ET), which accounts for the additional $0.61 of distributions received from ET.

Magellan Midstream Partners (MMP) also provided an additional $0.02 in distributions due to a distribution increase it announced since the distribution paid in May.

Realty Income (O) also paid an additional $0.01 in dividends compared to May 2019 due to its quarterly dividend increases doing their magic.

I also collected an additional $0.06 in distributions from EQM Midstream Partners (EQM) compared to May.

Lowe's (LOW) provided an additional $0.14 in dividends compared to May due to its massive dividend increase it announced at the end of May.

I also benefited from owning an additional share of AT&T (T), which increased my dividend income by $0.51 compared to May.

The largest reason for the increase in my dividend income from May to August was the purchase of 7 units in EPD through my new Webull brokerage account. This accounted for $3.08 in additional distributions.

More encouragingly, I continue to make progress on my goal of increasing dividend income in the first month of each quarter. I'd like to catch up my first month of the quarter income with the other months, and get those months above $50 by the end of the year. Fortunately, I believe that goal is well within reach.

How was your August? Did you have any new dividend payers? Was your August another record for the middle month of the quarter as mine was? As always, thanks for reading and I look forward to any comments you may have.