The Importance Of Limiting Discretionary Spending In Building Wealth

While contemplating the financial progress that I have made over the past several years and writing my previous blog post outlining the potent combo of dividend growth investing and frugality, it occurred to me that what has really allowed my investment portfolio to make it to this point in a relatively short period of time is my natural tendency to limit my discretionary spending.

Fortunately, I have been able to live on just over $100-$125/month in discretionary spending for virtually all of my adult life.

This is a stark contrast to the nearly $1,500/month that the average American adult spends on non-discretionary items (i.e. drinks, takeout delivery, gym memberships). That's damn near enough to fully max a 401(k) each year, which is why I believe it is incredibly important to make sure your discretionary spending is providing you with enough value to justify it. 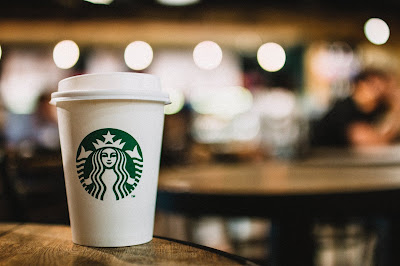 Image Source: Pexels (nothing against Starbucks, but this was the best free stock photo discretionary spending item I could find)
Total Monthly Discretionary Spending: $107-$122/month

For the past several years, my parents and I have had an agreement that we would rotate every other week paying for the cost of eating out each Friday night.

Given that we typically spend around $25 each visit at businesses, such as McDonald's, Burger King, Culver's, and so on, and there are typically two visits each month that I am responsible for covering, my typical month of spending is $50-$60.

Since my family and I generally eat home made meals the other 6 days a week, I believe this spending item can be justified as it provides a nice respite from meal prep and something to look forward to at the end of each week.

While a smartphone is practically an extra appendage for most these days (including yours truly), countless generations lived without smartphones in the past, so I must confess that this is a discretionary spending item.

Fortunately, my family is on a 5 line plan with Cricket Wireless for $20 a line/month (which is owned by AT&T, so I see a small kickback on my costs every month). Given that I receive 5 GB of data and unlimited talk and text for just $20/month, I am entirely comfortable keeping this as a recurring expense.

I'm not too much of a gamer, with the exception of the freemium mobile strategy smash hit game Clash of Clans. If there has ever been any game that revolutionized the mobile gaming world as much as Clash of Clans, I have yet to hear about it.

On a near monthly basis, Clash of Clans also offers solid values, such as Book of Building/Book of Everything items (which instantly finish upgrades and can save over two weeks of time), and so forth.

Since I began playing CoC in late 2013, I have played it much more on than off, quitting on two occasions for roughly 2 and a half years combined (primarily d/t school and work obligations). The gameplay rarely gets stale and I envision myself playing this game several hours a week for many more years.

The annual expense of hosting this blog works out to roughly a $10/month average, which isn't too steep of a price to pay for a hobby that consumes a couple hours of my time each week.

I use this service to subscribe to Jason Fieber's exclusive content, in which he details the activity in his portfolio, and updates his portfolio accordingly at the beginning of each month. I have followed Jason since probably around 2015. He and I think quite a bit alike in terms of our investing strategy, so I think $8/month to get his insights into what sectors and stocks are undervalued to the point that he is investing his own money in said sectors and stocks is worth every penny.

In the age of streaming, Peacock offers a decent value at $5/month when considering that tons of WWE Network content and live PPVs come with the service, which is great considering that I have followed the WWE since I was a kid in the early 2000s.

Let's face it, in a world that is as dependent on technology as it is, Avast's SecureLine VPN and Driver Updater programs for $2/month each on an annual subscription are lifesavers. I can go about my business in public checking my accounts without worry that a hacker is going to potentially have access to my sensitive information. The Driver Updater program helps my laptop to stay up to date and run as smoothly as possible, which is of the utmost importance for a device that I use upwards of 10 hours a week.

I am fortunate to live with my parents as my discretionary spending would be probably double or triple if I were required to pay for my own internet and cook my own meals each night (I'd admittedly probably eat out more frequently than I am now if that were the case, which is why I should really learn the valuable skill of cooking in the next few years to be honest).

Overall, I'm very satisfied with my discretionary spending in the ballpark of $100-$125/month, as I feel it strikes a nice balance between "treating myself" in the present and saving for my future.

This minimal discretionary spending has allowed me to achieve a savings rate in excess of 60%, and as a result, I anticipate I will hit $100k in investments probably in the next 2 years, assuming a relatively flat market.

Are there any discretionary spending items in your budget that you are considering dropping? Or do you feel fairly justified in each item as I do?

Thanks for reading and I look forward to your comments in the comment section below!