As I write this post, the last day of November is ticking away. The Packers suffered an expected, albeit disappointing pummeling at the hands of the San Francisco 49ers, which leads me to believe there is no chance they advance past the NFC Championship Game in a best case scenario.

Fortunately, the Bucks have won 14 of their last 15, and enter the last game of November in first place in the Eastern Conference with a record of 16-3. Giannis has started the season with a whopping 18 straight triple doubles, and there appears to be no end in sight to this marvelous feat!

However, most exciting is the fact that we get to discuss my dividend stock purchase activity for the month of November.

Find a cup of coffee, glass of water, or whatever beverage you're into and pull up a seat because this month was rather busy in terms of capital deployment (mostly in the last couple weeks as a spoiler alert)! 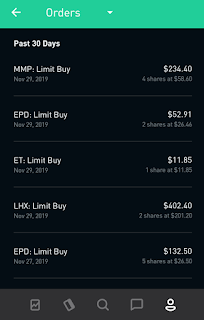 The first investment that I placed to start the month of November was Energy Transfer (ET). Throughout the month, I ended up purchasing 14 units across my Robinhood and Webull accounts at an average cost/unit of $11.94 or a total cost of $167.16, bringing the total number of units that I own to 43. These purchases boosted my annual forward distributions by $17.08.

This equates to a 10.22% entry yield on this block of units, which I believe provides a very attractive risk/reward ratio when we consider that ET's distribution is covered nearly 2 times over, ET's operating fundamentals continue to improve, and although its balance sheet isn't on the level of Enterprise Products Partners' (EPD) or Magellan Midstream Partners (MMP), the company still maintains an investment grade credit rating from the major credit rating agencies.

The next investment that I made during November was in EPD. I invested $211.30 in capital to purchase 8 units of EPD, which works out to a $26.41/unit average. That implies a 6.70% entry yield on the block of units purchased in November. The purchase increased my ownership in EPD to 27 units, and increased my annual forward distributions by $14.16.

Similar to ET, EPD's distribution coverage is nearing 2 while its DCF continues to grow, which implies a very safe distribution going forward. Adding to my rationale for investment in EPD is the fact that the company also maintains an investment grade credit rating from the major credit rating agencies.

The third company that I increased my position in during November was Altria Group (MO). This purchase was a small fraction of my overall purchasing activity for the month, but the 1 share of MO purchased at a cost of $49.25 helped maintain its status as the third largest holding in my portfolio in terms of dividend income, bringing my number of shares to 13. This means that the entry yield on the single share of MO that I purchased for the month is 6.82%, which added $3.36 in annual forward dividends.

While the company wrote down its investment in Juul Labs by $4.5 billion (what I personally believe is a strategic play for the company to eventually purchase the remainder of Juul Labs at a favorable valuation), it was business as usual at MO. The company reaffirmed its guidance of 5-7% growth in adjusted diluted EPS for the current fiscal year compared to last year's figure of $3.99/share, while also adjusting its expectations for future growth from 7-9% to 5-8% for 2020-2022.

It doesn't take much dividend growth for a near 7% yield to rapidly grow over time, and MO appears poised to at least deliver mid-single digit dividend growth over the next several years as it works toward deleveraging, which is why I'm comfortable holding this as the third largest position in my portfolio.

The fourth position of the month that I invested in is actually a new position for the portfolio, bringing the number of companies in my portfolio to 43 in whole shares (and there are 23 other non-overlapping names in my fractional share M1 Finance portfolio).

The position that I'm referring to is L3Harris Technologies (LHX). I initiated a 2 share starter position in LHX at a total cost of $402.40 or an average cost/share of $201.20, which is a 1.49% yield. The purchase increased my annual forward dividends by $6.00.

Without going too much into detail on my rationale for the investment in LHX (that will come some time in the next couple weeks on Seeking Alpha for those interested), what LHX lacks in yield, it makes up for in spades with its growth potential and overall quality.

With a payout ratio at about a third of its earnings and FCF, as well as the thesis that communication systems, electronic systems, and space and intelligence systems aren't going anywhere, LHX appears to have a long runway of high-single digit to low-double digit EPS growth in its future, not to mention at least as much dividend growth in its future.

The fifth and final company that I invested in during the month of November was MMP. I increased my position in MMP from 3 units to 7 units and to my 6th largest position in terms of distribution income, paying an average of $58.60/unit and a total cost of $234.40. This equates to a 6.96% yield on the units purchased in November. Across the 4 units added during the month, this boosted my annual forward distributions by $16.32.

While MMP possesses a coverage ratio of ~1.3 compared to the near 2 coverage ratios of ET and EPD, the company's balance sheet is stronger than ET's and about even with EPD's. Like both ET and EPD, MMP is also continuing to grow its DCF on a consistent basis, which reinforces the safety of its distribution.

Aside from my investments above in my taxable accounts, I also invested $366.00 into my CAIBX mutual fund holding within my employer sponsored retirement plan via both my contributions and my employer's 3% dollar for dollar match (you gotta love 3 paycheck months!).

Accounting for the sales charge, this allowed me to increase my position in CAIBX from 76.756 shares to 82.332 shares.

Assuming the same quarterly dividend of $0.50 and a $0.14 special dividend paid at the end of the year, these purchases increased my annual forward dividends by $11.93.

In my taxable accounts, I deployed a respectable $1,064.51 in capital during the month of November, which added $56.92 in annual forward dividends/distributions, for an average yield of 5.35%.

In my retirement account, I invested $366.00 in capital for the month of November, which boosted my annual forward dividends by $11.93. This equates to an average yield of 3.26%.

In total, I put $1,430.51 to work during the month of November, which increased my annual forward dividends/distributions by an astounding $68.85! This works out to a 4.81% yield, which offsets last month's average yield on invested capital of 2.72%.

Over the past 2 months, I have been able to invest $2,930.22 in capital and add $109.61 in annual forward dividends/distributions from investments alone, which is right around that 4% yield that I would like to consistently average from quarter to quarter.

If the past few months have taught me anything, it would be that no longer having to pay tuition or dedicate countless hours to my formal education is so damn great both financially and in terms of free time!

Were you able to deploy as much capital as you have been lately? Did you add any new names to your portfolio?

As always, I appreciate your readership! I'm looking forward to reading and replying to any comments you may have that provide insight into your DGI journey during the month of November.
Posted by Kody at 10:00 AM