Given that there have been major snowfalls in two of the past three Aprils where I live, it will be interesting to see how April plays out.

With that aside, I will be discussing my capital deployment during March 2021. 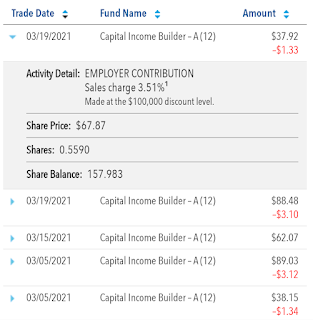 Beginning with my retirement account, I deployed $315.65 in capital between my 7% contribution to my Capital Income Builder (CAIBX) position, my employer's 3% contribution, and the $62.07 in dividends that were received from my position during the month.
Adjusting for the 3.5% sales charge on the contributions of myself and my employer, I deployed $306.76 in capital during March 2021.
The capital contributions and dividend reinvestment made during March helped my CAIBX position to grow from 153.282 shares entering March to 157.983 shares heading into April.
Factoring in $2.13 in net annual dividends/share (which was the net annual dividends/share paid out by CAIBX last year), my net annual forward dividends were boosted by $10.01 as a result of my capital deployment.
Moving to my taxable accounts, I reduced my Robinhood margin from $2,627.50 at the beginning of the month to $686.87 at the end of the month as a result of $1,850 in fresh capital contributions and $90.83 in dividends received in my account that were allocated to margin reduction.
Due to my commitment to reducing my Robinhood margin to zero in an effort to initiate the transfer of my brokerage account to Fidelity, the only purchasing activity during March was the CAIBX mutual fund in my retirement account.
The elimination of my interest bearing margin helped to increase my net annual forward dividends by $40.69.
Concluding Thoughts:
While March was a strong capital deployment month with $2,247.59 being deployed between retirement contributions, dividend reinvestment, and brokerage account contributions, this was largely because of the $1,400 stimulus payment that I received during the month.
Due to the $2,247.59 that I deployed during March, my net annual forward dividends surged $50.70, which works out to a 2.26% net yield.
My net annual forward dividends also increased $3.35 as a result of the 4 dividend increases that I received in March.
This activity helped my net annual forward dividends to surge from just under $1,500 heading into March to just over $1,550 heading into April.
Looking ahead to April and May, I am anticipating that I will deploy close to $3,000 and $1,700, respectively, which is primarily due to a 3 paycheck April (as well as a small tax refund).
I am therefore anticipating that my net annual forward dividends will spike from just over $1,550 at the end of March to $1,725 at the end of May (which will be helped by not only capital deployment into quality dividend stocks, but by the elimination of my $5 monthly Robinhood Gold fee by early April).
Discussion:
How was your March in terms of capital deployment?
What are you forecasting your April and May to look like on the capital deployment front?
As always, thanks for reading and I look forward to your comments in the comment section below!
Posted by Kody at 5:57 AM